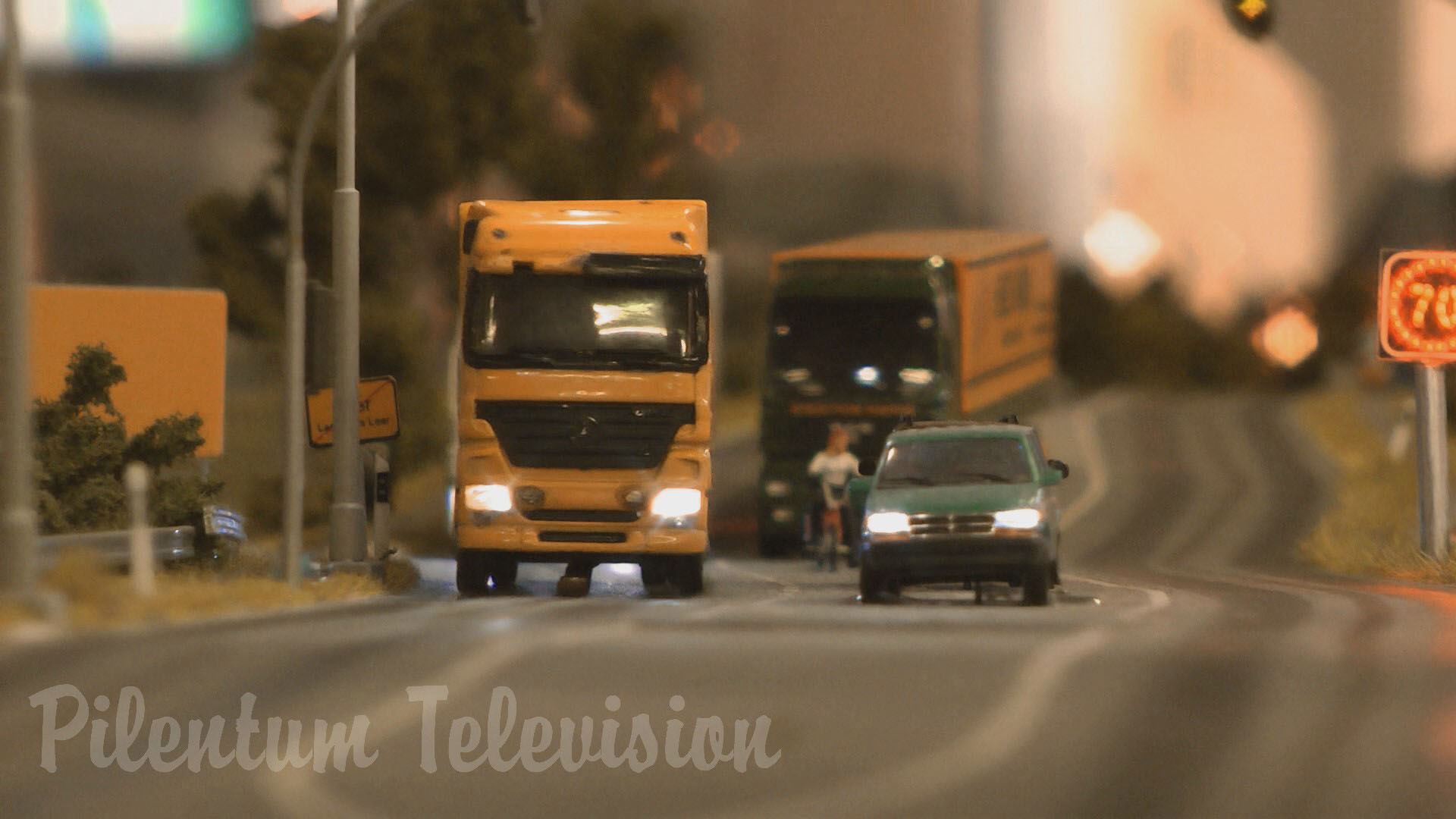 In this video we see a layout constructed with the DC Car System, which by the way is compatible with N scale (N gauge), HO scale (H0 gauge) and OO scale (00 gauge). To make this video even more entertaining, Pilentum Television dubbed the voices of the visitors and the disturbing background noises with real engine sounds.

Those car systems are working roadway systems that look great and they are easy to operate. These systems use a metal contact wire embedded underneath the road as a guide for the battery powered vehicles. This wire is flexible enough to be used on straights, curves and hills. Accordingly, the vehicles are fitted with a motorised chassis and rechargeable battery which pushes the vehicle forwards via a small motor and gear arrangement, following the guide wire. Therefore, the front axle is fitted with a guide stem and magnet that follows the guide wire. Finally, the vehicle then drives around the streets of the railway layout following the wire through junctions, roundabouts, carriageways and any other traffic arrangement.

In the meantime, there are lots vehicles to add to a road way including cars, tractors, lorries and buses. In addition to vehicles, there are lots of accessory modules to create life on the roads, for example, bus stops, traffic lights, etc. Especially, the bus stop module allows a bus to pull in off the main roadway, park, wait and pull away again without you having to press any buttons. Also the various traffic lights can be installed on the main roadway, so that vehicles will stop automatically if the traffic lights are showing red. Once it changes to green the vehicles will start up and drive off again. This level of automation always looks impressive on any model railway layout. Using the Faller Car System, magnet offset to one side on the chassis is what activates the various additional modules. Using the DC Car System, small infrared LEDs hidden on the layout activate those various traffic modules.

The most important component is the wire. This metal wire can be installed in one of two ways. The first way is using the special groove cutting tool available from Faller. This tool allows cutting the perfect depth groove to insert the wire into the layout’s baseboard. The wire can be glued down and then be covered over with filler to hide the wire from view. The alternative is not cutting a groove, but using laser-cut lengths of roadway. These ready-made plates are available as straights, curves, bus stop sections, etc. The plates already have the groove cut in them for the wire to be inserted. The plates are road sections that allow the construction of individual traffic routes, but you still have to lay and cover over the wire.

In the very simplest form, the vehicles drive on the hidden guide wire. Computer control is then not necessary at all. But as soon as junctions or special traffic situations are to be constructed, points must be installed into the layout’s baseboard, which are activated via reed contacts and magnetic switches.